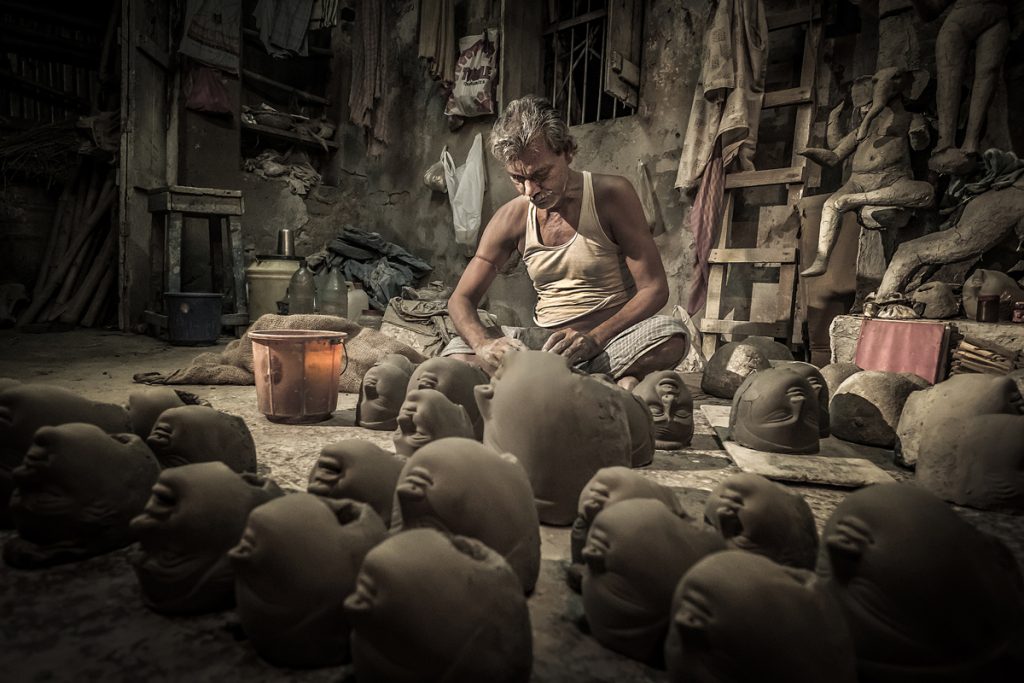 Bad Timing.
Kolkata, a 300-year-old city that was once the capital of India. This place is known for its various festivals throughout the year. The most famous and colourful festival is in the worship of the Goddess Durga, locally known as Durga Puja. However, due to my terrible timing of my trip, the dates meant that I would totally miss it all! However, covering the big festivals was not my plan at all on this trip. In fact, I was looking to capture a more intimate portrait of daily life in this beautiful, crazy, mysterious city.

Making Hay.
One of the main parts of the Durga Puja festivities is when huge clay idols of gods get immersed into the waters of the holy river. I figured it would be a superb time to see just how these sculptures are made in the build up before the festival. The incredible often life-size or bigger clay and straw sculptures are produced painstakingly by an army of artisans using methods passed down often through many generations. It just so happened that I had chosen possibly the best time to visit the area where they make all these idols. There would be plenty of activity with the various workshops all in full swing, trying to meet the orders for the coming festival.

Kumortuli.
The district where all these huge clay and straw sculptures are created is known as Kumortuli, literally meaning potters quarter in the local language of Bengali. It’s a mesmerising labyrinth of bustling, confusing dark alleyways. Often in the dank, smelly lanes, I would see rats running about or get bitten by mosquitoes, but it is well worth the suffering. Often only armed with the trusty Fujinon 14mm due to the tight spaces these small workshops are addictive. My advice is to leave the backpacks at home and travel as light as possible. I asked one sculpture if he found the presence of photographers annoying at all. “only when they knock the fingers off my sculptures with their bags” he told me.

The area has become more and more popular with photographers over recent years, and it is not uncommon to see other snappers. As a result, the people of Kormutuli has grouped together, and you now have to buy a permit to take photographs. These are purchased from a guy call Amit who works out of a weird empty store at the end of the main road there. On my first visit, I did my best to avoid him and didn’t take photos, using the time to get a feel for the place and look at the light. As it turns out, Amit is in fact, kind of cool and on my second visit, I spoke to him at length. He explained to me he doesn’t sit in the empty room all day but in reality works out of his radio repair store just opposite. He was keen to talk to me about where I was from and how I had found the place. I thought since he was charging me to take photos I would grab some shots of him just for fun. He said that no-one had ever done that before and found it amusing. The cost of the permit I had to buy from Amit was 20 rupees so around 25p/30cents, so it’s more of a token gesture really, with the profits going to help with the general upkeep of the area.

Contrary to what I had read about getting to the potter’s district early in the morning, I decided to hit this area around dusk. This was partly due to me not really liking shooting with other photographers present and also on the advice of my pal, a talented local snapper, Ritesh whose advice had been invaluable on this trip. He said that the light would be better once the sun had set and the sculptors had turned on their lamps. It turned out to be true, and the latter lighting fitted my style better.

Once again my plan was to seek out interesting light and then supplemented it with flash where necessary. I carried a Godox Ving850 flash mounted on my carbon fibre monopod from Feisol in a small sling with my other gear just in my pockets. As before I spent time talking with subjects and getting to know them while observing them work. This method afforded me time to set up a flash and let them become comfortable with me watching them work.

I visited the Potters quarter many times during the course of this two-month stay in India, and every time I went back the place had a different feel to it. Everything had moved on from the previous visit and was entirely different. A workshop that yielded some great images the day before was now too busy or too empty to be of much use. It meant that no matter how many times I visited it would seem the job was never finished. Before too long the people of Kumortuli there got to know me, and this was helpful. I was able to talk at length with some of them and when I returned smiles or knowing looks would greet me. I know I will be back again to photograph the “God Makers” of West Bengal, like so many of the places I visit in India, It’s addictive.
I have been asked about running an India 2018 Kolkata workshop, if you are interested then have a look at the photography workshop page.