Into the desert the Pushkar nomads

My continuing exploration using the Fujifilm X-Pro2 System in India.

THE SANDBOX
With the sadhu box ticked for now (see the previous posting by clicking here), I headed out for a scout to the desert on the outskirts of town looking for the gipsy nomads. I had a couple of days left and knew that was never enough time to do a complete study. However, I thought I could lay some ground work for the next visit. The gipsies hover around the edge of the town for a few months at a time and work the hotels as dancers and musicians and even snake charmers while herding goats to make a few rupees and scrape a living. Again, on my first visit, I didn’t take camera gear as I didn’t want to get all in their face without first getting to know a few in the camp. I had recruited a local and asked if he could go and check the location of possible camps before my arrival. So within about 20mins on the back of his motorbike, I could see the first signs of the gypsies camp.

I laid the foundations so I might return at dusk the following evening to grab a few frames. The camp is relatively abandoned during the day, as the inhabitants will be off busying themselves in the local town, only to return at supper time to cook. So, this gave me a very narrow window to get some shots, between them returning to camp and losing the light completely behind the surrounding mountains.

On my return visit, I was kicking myself as In the hurry to strip my kit down to a smaller bag I had forgotten my ND filters for the Fujinon 35mm f1.4. I knew this was my only chance to get any frames of the nomads, as I would be leaving town the next day. I had to make a decision, go back to the hotel and get them, this would take me around 30mins round trip or stay put and make do. I was looking at the sun there was time before sundown to get to the hotel and back. But I hadn’t accounted for the mountains. I had time before sunset sure, but I guessed I had only around 20 mins before the light on my subjects had the shadows of the mountains cast across the area. So I made a plan to wait until I had almost lost the light to start shooting and make do without the ND filters. 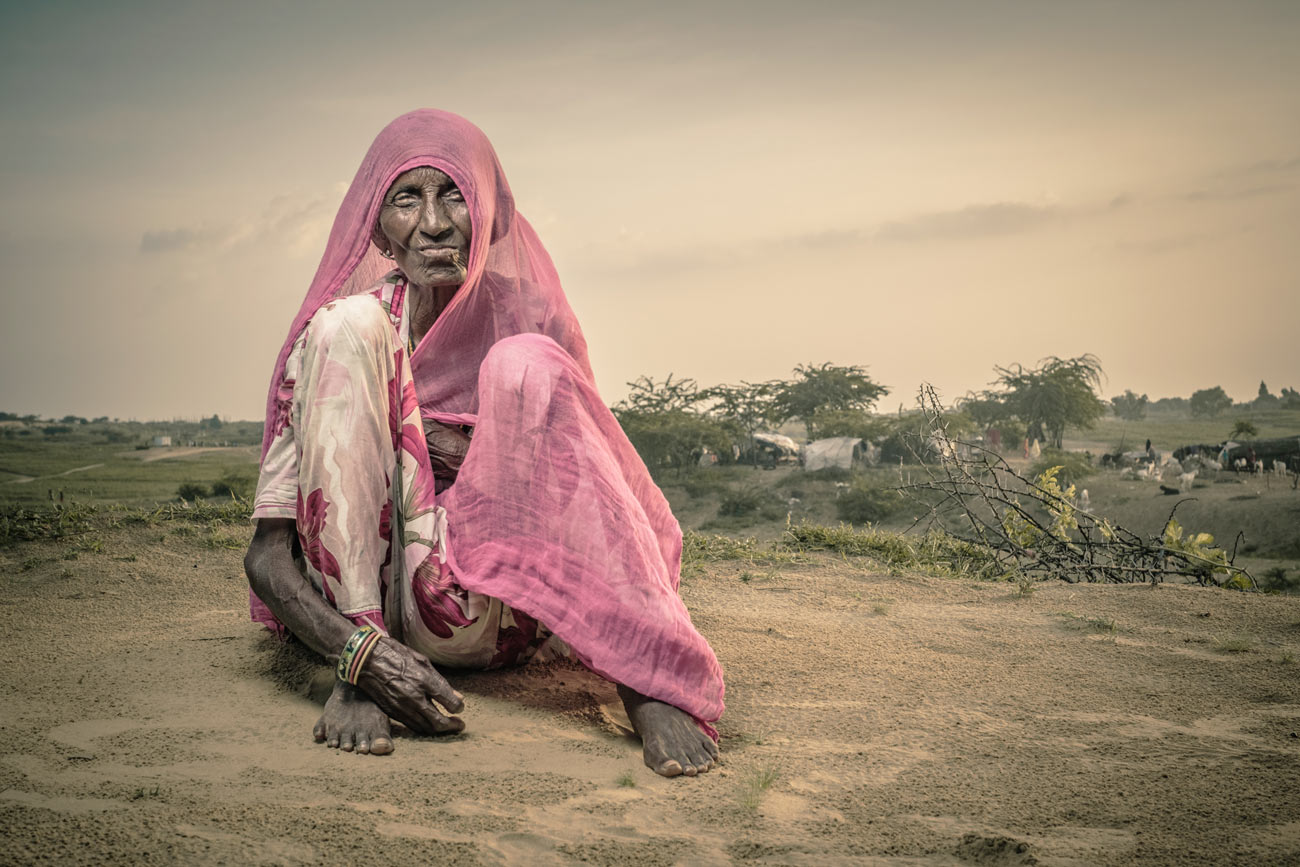 I had an opportunity to I just hang out with the gypsies for a while, and they dragged out a bed for me to sit on. I spoke to them through my local guide while keeping an eye on the fading light. Then in no time at all, it was show time.

I managed to grab a few frames while working as fast as I could. My subject was the elder lady of the family, she had a daughter I had met the day before who I really wanted to shoot. The problem I had was it was really now or never, and her daughter was not back from town yet. So, I had to quickly rethink the plan, as I was about to lose my window of opportunity altogether. 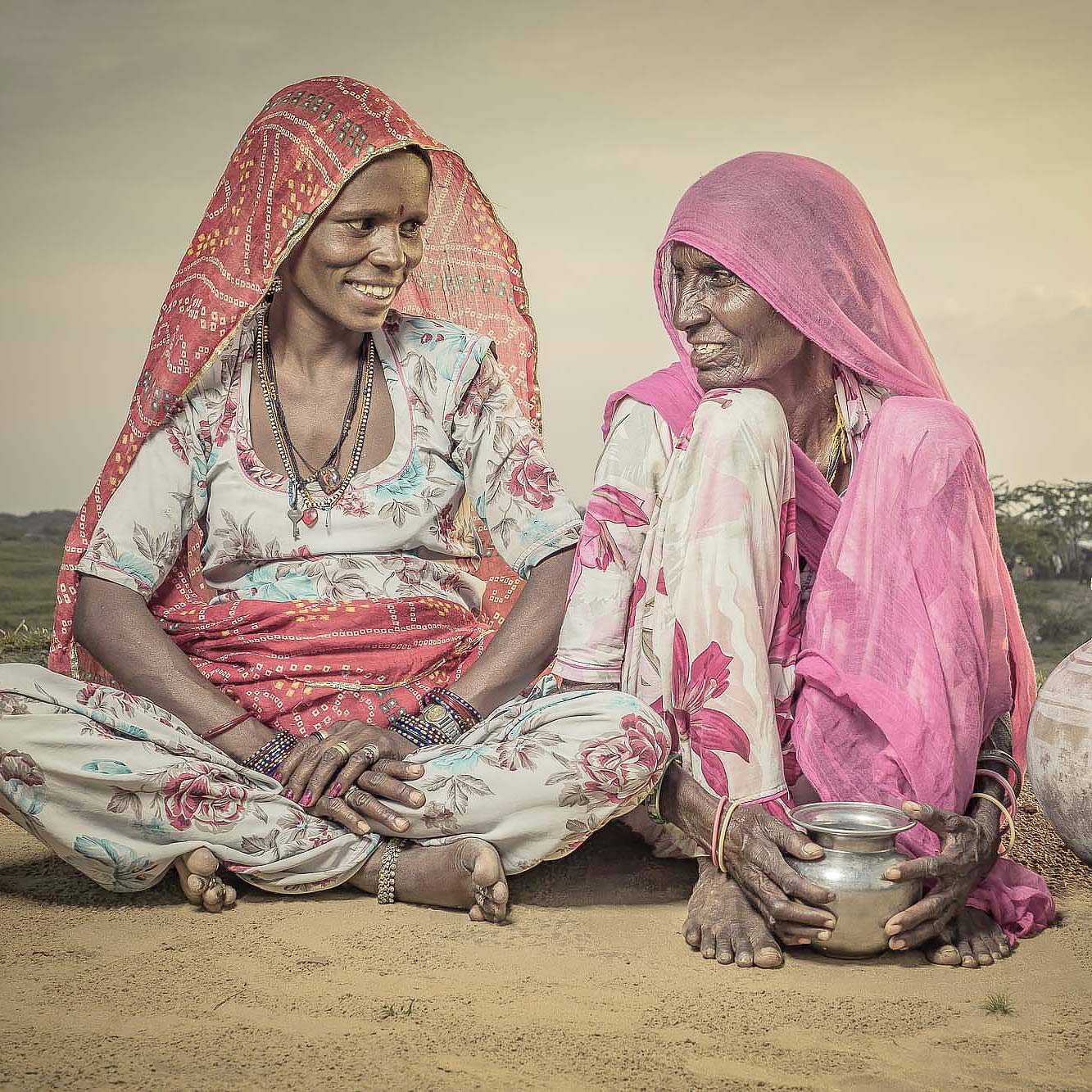 I had pre-rigged the softbox with a grid on the Godox 360, using it boomed overhead and slightly to the off side from the sun. Shooting on the Fujinon 35mm f1.4, to begin with as it’s my first choice for this type of portrait and very sharp. In this situation, It’s so tempting to bring the ambient light way down for an overly dramatic effect, and I had to try to resist that as I wanted a softer feel to these shots. There were huge ants everywhere and spiders. Whilst I was flicking a spider off of my bag looking a bit concerned at my guide he leaned towards me, ” it’s not those you should worry about it” he cooed to me “It’s the snakes and the scorpions”. With a few different frames shot of the older lady and her other daughter in the bag, I was happy that I had captured at least something. I estimated I had a few mins of daylight left before we were in shadow. Just to my left, a guy I had briefly spoken to the night before, had just started cooking his evening meal. So, I thought I should try to capture an action portrait as I prefer that sort of real life thing rather than posed setups.

Below is a video that might help anyone interested in the gear I current carry for this type of shooting.

Almost immediately I realized I needed to go wider. I was backed up into a tent post so could not move back, the Fujinon 35mm I had mounted was not wide enough. I needed to swap out to the trusty Fujinon 14mm f2.8 that I had in a pouch on my belt. A further delay and now I knew it was a matter of minutes before it was game over due to the light. The sand here is so fine it’s like flour, I needed to be extra careful when changes lens in a hurry. Had I dropped it, it would have certainly been the end of that lens. It helps if you have practiced with your gear and know it backward. This is the sort of time when you really need to trust your equipment and be decisive with you actions. The guy cooking just carried on and I didn’t give any direction to him. I would have liked to have moved him around maybe a little, but that wasn’t an option due to the time constraints. In the end, I bagged some grab shots of him preparing his evening meal.

As it happens despite the manic rush, it paid off and I’m reasonably happy with the results of my brief time with the nomads. Plus, I know that I will always have a very narrow window to shoot them just after they have returned to camp and prior the sunset. So, sure mistakes were made. However, I always like to judge people not on if they make a mistake but on how well they act to solve the issues and still get the job done. One thing I know for sure is I will defiantly go back and explore this subject further, as these people and the way they live are just so fascinating.

Now back to Kolkata to continue my exploration of India and its inhabitants. In my next blog, I go in search of the men who create God, but that’s another blog post.

Phil m – Stay in touch – Subscribe to my newsletter

Holymen of India – meeting the sadhu The Potters of Kolkata – Kumortuli